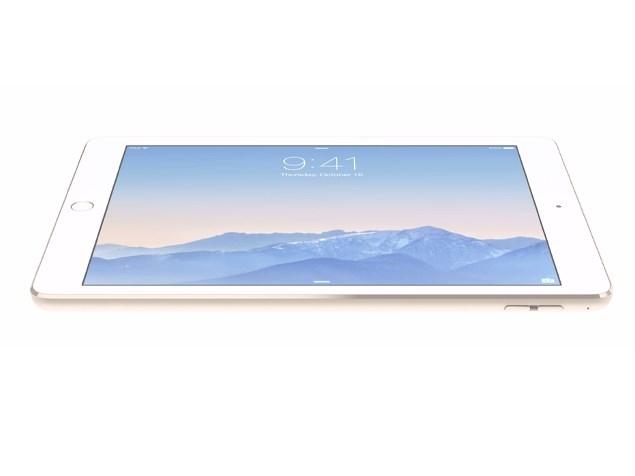 If we talk about the display configuration of new iPad Air 2, then you would discover the same display as before – 9.7 inches, resolution of 2048 x 1536 pixels, which is close to the standard (if not a reference) color rendition and all that was before. Change only the technical component, the display is thinner and air gap reduced and also added almost no polarization layer, like iPhone 6. And it results in the amount of reduced glare. Unfortunately, we could not look at the display under the sun. In a typical home environment glare from the lighting is really less visible, which naturally affects the great comfort of use.

If we talk about the sound, Speakers in iPad Air 2 are stunning! Two of them, but they are still located in the wrong place! We have speaker around the display as the Nexus 9. But so far satisfied with what we have. The sound is awesome, but there is one big it vibrates excessively. This vibration diverges on the table even at half the power of sound. And when the iPad in the hands and the music is on, hands are unpleasant because of vibration. It spoils the experience of using the device, but if you use it with a stand or not listening to music, not the fact that the problem you are strongly touches. But in any case, you should pay attention before buying, because some it can be very annoying.

If we talk about the camera configuration, the front camera designed for attending HD video calls, it is very good for both of the purposes video recording, video calls and also good for taking selfies. The main camera also gained confidence – and now there is continuous shooting, and slow motion video (120 fps), and Time-Lapse. Difference with the camera of iPhone 5 there is little, but, you see, in the iPhone 5 is not the most boring camera, even today. And from iPad Air 2 is quite steep (for tablet) camera, which greatly pleases the fans.

The Air 2 became steeper and the Mini received only fingerprint scanner and gold case. But now it’s about the Air 2. The new processor A8X with triple-core processor and graphics in an eight different tests proves a real verdict and a leader. By the way, with the components of the processor was not all too clear. In short, the stock performance is enough for any task, even it will satisfy the most demanding user. In practice, a user receives some colossal difference now, but later, when he grows up level of software, then there will be something to talk about.

Big revolution was an increase in the amount of RAM. iPad Air 2 comes with two gigabytes of RAM, rather than one. Yes it has definitely improved the performance of new tablet. Till now, it seems very interesting in use and performance. Every year Apple is adding something new in its iPad Air series let’s see what surprises it will bring with the iPad Air 3 release.