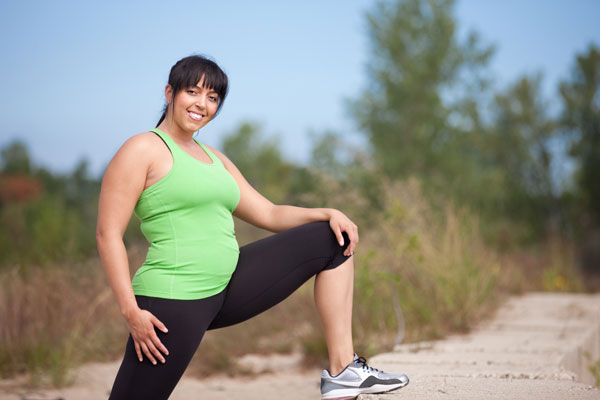 Can You Be Fat and Fit?

So I’ve attended weight loss boot camp in Milton Keynes now for about three years.  In that time I’ve seen my waistline shrink, my dress size go from a 14 to an 8 and my physical stamina improve beyond measure.  I literally don’t think I’ve ever felt better about myself.  In my class however, there are two women who are without question overweight.  They’ve been in the class since I started, almost never missing a class and really giving it everything they’ve got . . . usually more than me!  I’m ashamed to admit that whilst I’ve been planking, squatting and lunging alongside these women . . . I’ve often wondered why, after all these years, they’re not in better shape?

Then came time for the 2012 Olympic Games.  The world got ready to watch its most fierce female athletes compete in London.  And yet what was it that dominated our headlines for those three weeks?  Australian swimmer Leisel Jones being taunted about her weight.  The masses declared the eight time medallist fat and unfit to represent her country.  We also heard constant low blows directed at the British Women’s Volleyball team about their saddlebags and muffin tops.  British swimmer Rebecca Adlington received tweets about her physique that were so vicious they caused her to leave Twitter altogether.  I could not have been more angry watching what these women were being subjected to.  I mean for goodness sake!  These women made it to the Olympics!  How unfit could they be?

Then my thoughts returned, sheepishly to the ladies at boot camp and my own judgements on their physical fitness based upon the way they looked.  And it occurred to me that the subconscious connection that I . . . and apparently others . . . make between what a person weighs and their physical fitness and health needs some real re-evaluation.

Recent studies show that you cannot judge a person’s fitness by the way that they look alone.  There is a surprising new train of thought surrounding size and exercise.  These studies suggest that being overweight and even obese, may not on its own be the health threat that we’ve always thought it to be.  A study conducted in 2012 by the National Cancer Institute found that those that were moderately obese actually lived around 3.1 years longer than people with normal weight.  Another study which was published in the European Heart Journal, proved that when obese people are metabolically healthy – which means that their blood sugar, cholesterol, blood pressure and other factors fall within a healthy range – they are not at any greater risk of cancer or heart disease than those with normal weight.

Glenn Gaesser, PhD, is a professor of exercise and wellness at Arizona State University.  In his book, ‘Big Fat Lies: The Truth about your Weight and your Health’ he says ‘What we’re learning is that a body that exercises regularly is generally a healthy body, whether that body is fat or thin’.  In the European Heart Journal’s study the metabolically healthy obese were found to be more physically fit than their peers, which leads Gaesser to believe that the message to people needs to be changed.  People need to know that as long as they are exercising regularly, they shouldn’t necessarily be looking at the scales to determine how well they are doing.

There are many reasons why exercise is so good for you.  Muscles consume more sugar than anything else in the body, so if you muscle mass is increased it reduces the risk of excess sugar building up in your blood – which is basically what diabetes is.  Regular exercise also reduces inflammation in the cardiovascular system, affecting the secretion of clotting hormones.  This allows blood to flow easily to the muscles and prevents deadly clots from forming.  Moderate exercise, like walking, can also reduce the amount of potentially lethal fat in the liver, when combined with a healthy diet.  Study after study has shown that overweight and obese people that do exercise regularly still reap all of these benefits and improve their metabolic health . . . even if not a single pound drops off.