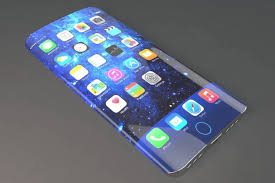 Curved OLED Display For The iPhone 8

So now the Apple is “serious” about adopting flexible OLED (organic light emitting diode) displays for the upcoming iPhone 8, but the technology is not going to appear in Apple’s products anytime soon.

iPhone 8, it can expected to be released in 2018 after the iPhone 7 and 7s in 2016 and 2017 respectively, could possibly be the first iPhone, which have the same OLED displays that are currently found in Samsung’s Galaxy lineup of flagship smartphones.

From an unknown industry source cited by South Korean publication Business Korea, who says the shift to OLED displays will help Apple address current troubles with its LCD touch screen, including color accuracy, saturation and brightness.

It is also rumored that the LED displays have the potential to open up a huge market for Apple, which has not yet used the OLED technology in any of its iPhones till now. For many years, Apple has been rumored to take the Organic LED route, as Android phone makers such as Samsung and LG have been doing so in the last few years and have appeared to be good successful in that aspect. However, Samsung is not reportedly without its own production bottlenecks for flexible displays, so it makes sense for Apple to put off using the technology until the suppliers can prove to be able to meet the huge demand for Apple’s iPhones.

Still, the apple iPhone 8 has a very long way to go from the conceptual stage for market, and plenty of new improvements will certainly crop up in three years between now and its launch.

It is a rumored that  LG Display, which is one of Apple’s suppliers for the Light Emitting Diode displays used for the Apple Watch, is preparing to have one of its own manufacturing facilities in Gumi shift from an LCD line to an OLED line. The facility is expected to be ready for mass production by 2017, and it will launch most anticipated iphone 8 in 2018.

This is likely that the first ever flexible iPhone may be introduced in 2018, as Apple’s top-tier display suppliers are hardly working on it.