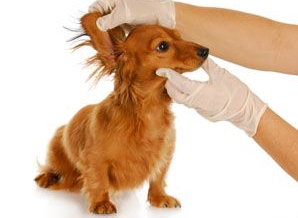 Deciphering and Treating Ear Infections in Your Canine

Your animals are like your children, and it is no less painful to see an animal sick than it is to see a child sick. Just like in children, ear infections are a common ailment in canines, but the following information can help provide a set of guidelines to detect and treat the ailment.

According to the ASPCA, the most common cause of ear infection in dogs is bacterial. Because organisms create waste, the most common symptom of infection is discharge. Discharge may appear in many colors, including white, yellow, and brown, and may have a bad odor.

Pain can alter mood and a dog may behave in uncharacteristic ways. It may be sluggish or irritable. It may rub it’s sore ear on the furniture or floor, shake or tilt it’s head, lean or fall to the side when standing or walking, or not come to you when you call.

Other visual symptoms that indicate an ear infection in a dog include redness, swelling, bleeding, scabbing, and hair loss in or around the ear.

This type of infection is most similar to swimmer’s ears. A dogs ear canal slopes downward and are susceptible to this condition. The symptoms of Otitis Externa are: redness, swelling, and itchiness of the outer ear.

When an ear infection is caused by allergies, canines have the same symptoms as humans: itchy, watery eyes, runny nose, sore throat, and discharge from the ear.

Davis states that there are over 200 types of bacteria that can cause canine ear infections. All of them present the same symptoms as Otitis Externa, but often with odorous discharge. Ear mites are one cause of bacterial infection.

According to the ASPCA, if an ear infection fairly mild, a veterinarian will prescribe antibiotic ear drops or topical cream. The veterinarian will also teach you how clean your dog’s ear, which is essential for complete healing.

For chronic or severe infections, the veterinarian may suggest flushing the ear or performing surgery. There are several surgeries available including removing scar tissue in the canal, canal restructuring and lining the canal with a tube. The type of surgery depends on the effects of the infections.

Originally from San Jose, California, Erika Remmington is a recent graduate of the University of California, Berkeley. She enjoys spending her time with her husband and 18 month old daughter. She also enjoys rock climbing and out door activities.