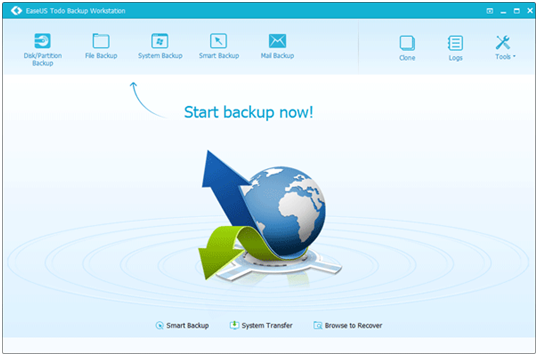 EaseUS  ToDo Backup has been around for quite a while, but the latest versions are a whole lot better than the previous ones. The company is surely developing the backup product in their utility software range. However, the improvement over versions is not a huge leap, but it does well for a backup program of this category. The backup software is comprehensive; it supports basic backup and extended set of features for image backup as well.

The software fits well in Windows operating system. For any version of it including the latest Windows 8.1, the software appears to perform near flawless. Hopefully a version optimized for the upcoming Windows 10 is under development as well.

The integration with quite well with Windows operating system; when a folder is clicked which is integrated with ToDo Backup; the folder opens like any other normal Windows folder.The users get to explore and recover files on that folder if necessary, or update the backed up files. If you want to restore a full folder then there’s an option that lets you do that.

The file selection dialogue box has gotten a facelift from its previous versions. There’s an easy preview window to the right pane and it lets the users see the contents stored in a folder. Management tab is another option for conveniently checking the files and re-running the backup if it’s necessary. If a backup job was interrupted then that could be repaired from the same Management dialog box.

A highly useful feature is called the partition and drive imaging. This feature comes useful if you want to  migrate an OS to a new hdd. The drive imaging and partition feature will shift the entire contents of a hard disk drive to another keeping the partition table as it is in the previous hard drive, just increasing the ratio if it’s necessary. Full and incremental drive imaging makes the task happen at ease. Through this feature, a computer user won’t have to manually partition a new hard drive and copy the files one by one to the new hard drive. Both time and efforts are saved to a greater extent.

Other features are namely backup files or entire drives to optical media like DVD or BluRay discs, wiping data from a hard drive partition, cloning an entire drive and backing it up, scheduling backups etc. EaseUS ToDo Backup also creates recovery boot disks as well; not only Windows based but also Linux based boot recovery CDs as well.

The EaseUS ToDo Backup software is basically a paid software, even though the free demo version is still enough to perform some initial tasks.ToDo Backup software is available for only $29 for the Home Version. Purchasing the full version unlocks plenty of features like backup and restore Outlook backup, snapshots of a system or Windows PE Boot disk, readymade. The Workstation version comes with few more versions and costs $10 more.

This backup software does what it is supposed to do. The tasks are performed at ease, the software acts fast. Even though it takes up a noticeable amount of space on the RAM, it’s still a software worth the money it costs.