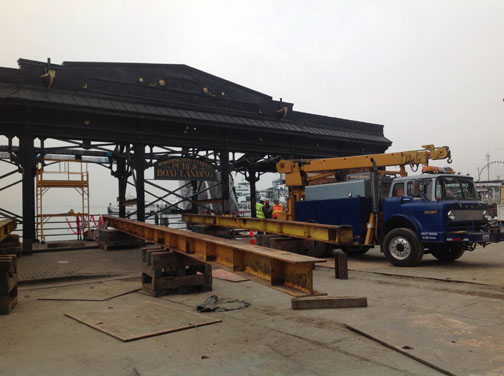 Site Safety – How To Handle and Move Structural Steel Properly

There’s really nothing more annoying than spending half of your life in any given profession or industry, only for someone you’ve never met before to come over and tell you you’re doing something wrong. Suffice to say, this is precisely why so many seasoned professionals tend to sneer and snarl at the thought of health and safety training, as in most cases they’ve been in business for long enough to rewrite the book from cover to cover.

However, as far as the professionals at wesellrsj.co.uk are concerned, there’s always room for improvement. The simple fact of the matter is that if site safety was known, understood and proactively strived for by every site worker across the country, there wouldn’t be thousands of accidents of varying levels of severity every single year. It may be annoying to hear preachy calls for safety and awareness, but no nearly as infuriating as the fact that over 90% of all building site accidents are deemed 100% preventable.

Rules…They’re Not Made to Be Broken!

It’s the simplest of things and the most minor of oversights that have the potential to snowball into much more serious accidents and incidents, which in many cases come down to workers flouting the rules they consider to be optional…when indeed they’re anything but. In the case of structural steel for example, it’s not as if RSJ’s are the kinds of supplies that are prone to getting up, wandering around and getting into trouble off their own bat, so when and where these kinds of supplies cause an accident, it’s generally the worker that’s responsible, not the RSJ itself.

So, at the risk of annoying a few of the more seasoned building-types across the UK, here’s a quick refresher of just some of the most important and yet oft-overlooked guidelines for handling and moving structural steel safely:

First and foremost, there’s plenty of equipment and machinery around a building site that can be used to handle and move structural steel safely…assuming of course the person operating the machinery knows what they are doing. It’s common to assume that just because you have a driving license and are aware of how a drill works, surely you must be competent enough to operate heavy lifting machinery, right? Wrong – there’s a very good reason why there are various licenses and training courses that apply to these kids of gadgets, so if you’re not up to the job, you shouldn’t be going anywhere near them.

When there’s anything lying around a building site that health and safety rules dictate must be moved only by way of the proper machinery, this generally means it’s a bad idea to try and lift it by hand. Sure, you might fancy yourself as a bit of an action hero, but when and where it slips from your grasp and shatters a poor bystander’s leg into a million pieces, who do you think’s going to be held liable? It might feel as if red tape and rules are getting in the way of you doing your job as fast as you’d like to be doing it, but it’s simply not worth flouting the rules and risking the consequences as you really never know when fate might jump up and bite you in the rear end.

Proper Use of PPE

Personal protective equipment – three words that never fail to annoy the living hell out of most construction site workers. In the course of an average lifetime, most workers will never fully appreciate the benefit of PPE as they won’t be exposed to a potentially dangerous incident. However, it takes just one shard of metal flying off at lightning speed or one razor-sharp edge of a poorly built RSJ to inflict the kinds of injuries that could literally end a career or maybe even a life in a split-second. It’s a bit like any other insurance policy – you don’t think you need it and hopefully you never will, but when the time comes it could save your life!

Last up, when operating any kind of heavy lifting equipment or machinery to move structural steel around a site, there’s a very good reason why the respective machine’s guidelines say not to load more than 5,000kg onto it at any one time. Suffice to say, it’s a reason that might just become painfully apparent if you decide to try your luck with 5,100kg of structural steel beams, which could quite literally tip it over the edge and result in the kind of health and safety nightmare you might never fully wake up from.

Really, it’s a risk that’s just not worth taking.