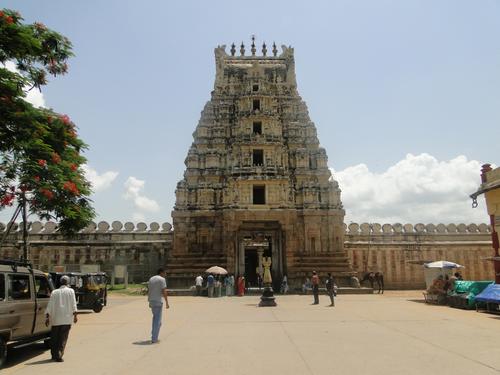 Srirangapatna is a quaint beautiful place in Karnataka, most popular for its immense religious significance and for the fact that it is the site where the great Tipu Sultan fought the British and met a glorious death. It is situated close to Mysore city, falls under the district of Mandya, and is basically a river island that is enclosed on all sides by Kaveri River. It is one of the prime pilgrimages for the Vaishnavites and home to some of the most revered and beautiful Hindu temples of south India.

The distance between Mysore city and the religious town is about 15 k.m. and it takes a little more than half-an-hour to cover the distance. The place lies on the road that connects Bangalore with Mysore and most of the buses passing-by stop in town’s bus stand. There is also a small railhead lying on the railway line again connecting Bangalore and Mysore. It is a convenient and quick way to get into the island town. Those who are taking flights, the Bangalore airport and the Mysore airport are the two airports close to Srirangapatna.

The splendid natural beauty of Srirangapatna is simply mesmerizing. Situated a few kilometers away, there is a place called Srirangapatna Sangama which is the holy confluence of three Hindu holy rivers, namely Kabini, Kaveri, and Hemavati. It is a highly revered spiritual site and remains busy with the large hordes of pilgrims and tourists. The place is also popular for being a neighbor to India’s second biggest waterfall. Located about 27 k.m. away the heavenly Shivanasamudra Falls is a stunning waterfall with thick flow of water that rushes down from a considerate height. It is also the 16th largest waterfall in the world.

There are a couple of reasons that lure travellers to the island town. However, the prime reason for the tourist to visit the place is the highly celebrated Ranganathaswamy Temple. The temple dominates the town and is the reference based on which the name of the place is derived. It is a very old temple whose construction began in 9th century under the guidance of the rulers from Ganga dynasty. However, it took about three additional centuries to completely built the temple. The presiding idol is one of the many incarnations of Lord Vishnu. Built in a long time period, the temple exhibits the best of ancient south Indian architectural style. It is a harmonious medley of Vijayanagar and Hoysala styles of temple architecture. Being at the place during Navaratri festival is highly recommended. It is one of the biggest festivals celebrated in the region that lasts for 10 colorful days.

There are several other ancient and modern temples in the region and visiting them is a popular trend amongst the tourists. Some of the most significant temples and shrines here are: Ayyappa Temple, Raganatha Nagara Ganesha Temple, temple of Lord Srinivasa, Jyothi Maheswara Temple, Sathyanarayana Swamy Temple, and Bidhcotta Ganesha Temple. Amongst the other popular places that one would like to visit are: Gumbaz of Tipu Sultan, Dariya Daulat Palace and bagh, Srirangapatna Fort, Garrison Cemetery, and Ranganathittu Bird Sanctuary.

Most of the hotels here offer reasonable lodgings. Being a popular tourist destination and important pilgrimage, the place is visited by thousands of tourists. There is enough number of hotels in Srirangapatna to effectively take care of the stay needs of the guests. Some of the popular hotels in the town are: Mayura River View Hotel, Young Island Resorts, Amblee Holiday Resort, Fort View Resorts, and Balaji Garden Resort.

Dimpy Roy is a travel writer working with an Online Travel Guide. She guides travelers to various resources where they can find best hotels in Srirangapatna and choose the best one.