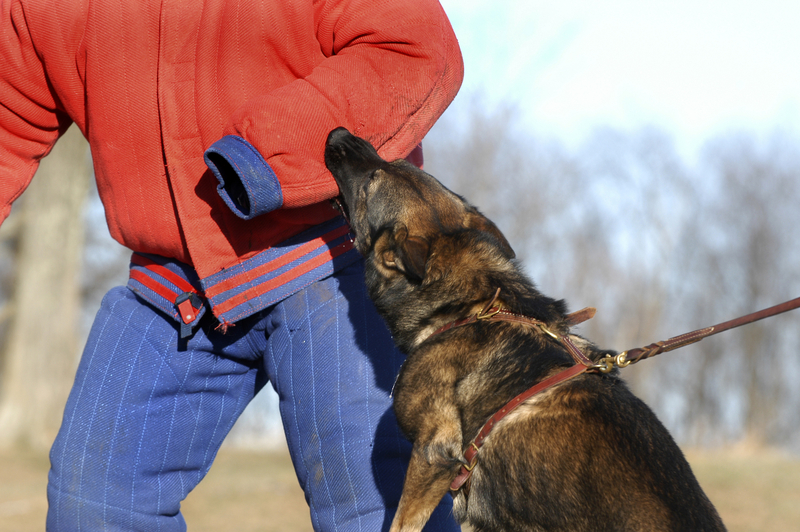 Dog bite law in the United States varies dependent on location and in addition to the common law an attorney must consider both state legislation and also the local law applicable to the town or city.

Some states still retain the old dog bite law whereby a pet owner will not be held liable in the civil courts to pay compensation unless the animal has shown previous aggressive tendencies. Most states do however make the owner liable for the consequences of all incidents of aggression and compensation for trauma is payable in these cases even if there has been no previous attack or show of aggression. Dog bite law in every state confers liability if the pet owner was negligent or maintained custody or control with knowledge that the animal was dangerous or aggressive.

In some communities dog bite law includes a “leash law,” which requires all dogs to be restrained or under the control of the owner, violation may constitute negligence. It may not be necessary to actually physically restrain the animal and a court may decide that adequate control is being exercised if the animal is at heel or is beside a competent person and usually obedient to that person’s commands or is within a vehicle or the property of the owner.

Not everyone is entitled to claim compensation as a result of being bitten and dependent on the relevant state dog bite law there are a number of important exceptions which need to be considered by both the victim and the owner. Some of the exceptions applicable, in some but not all states, to the general rules which preclude civil action include:

Who is or who is not a trespasser is a matter which sometimes causes difficulty for the courts. One widely used definition is as follows:

Every unauthorized entry on another’s property is a trespass and any person who makes such an entry is a trespasser. A trespasser is one who goes upon the premises of another without invitation, express or implied, and does so out of curiosity, or for his own purposes or convenience, and not in the performance of any duty to such owner. Dog bite law generally states that it is not necessary that one making such an entry should have any unlawful intent,

Less than 2% of claims involving physical injury result in a court trial. Insurance companies and attorneys always try to negotiate a settlement or may invoke alternative dispute resolution using either mediation or arbitration rather than starting a lawsuit. Claiming compensation under state dog bite law is not always straightforward and advice should always be obtained from a competent lawyer. Compensation settlements may include the following :

If you are the innocent victim of an attack then you may be able to recover compensation using a contingency fee arrangement which means that if your lawyer doesn’t succeed in getting a settlement for you then he won’t get paid his legal fees.

The laws relating to personal injury vary from state to state, and even from city to city and are a mixture of city, county and state statutes. In all states common dog bite law covers recovery of compensation from :

A person whose negligence caused the attack. Negligence is defined as an unreasonable act or omission to take action or give a warning.

A person who violated a leash law or other law intent on protecting the public will be deemed negligent and therefore liable.

A person who kept an animal with known vicious propensities.

In most states dog bite law oncludes statutory strict liability which ensures that an owner is liable to pay compensation whatever the circumstances. The general rule is that an owner is strictly responsible for bites and will be held responsible merely for being the owner. It is unnecessary to accuse the owner of being negligent or breaking a law in order to claim compensation.

A minority of states has the one free bite rule and they generally do not have specific statutes. A dog bite injury lawyer may have difficulty in proving cases in these states. The owner and possibly others are not liable for the first injury, unless negligence caused the injury to occur and thereafter there is strict liability for harm caused by a known dangerous propensity.

Others May Be Responsible

In certain circumstances dog bite law allows a claim to be made against others including employers, landlords, day care operators, trainers and breeders. To succeed in a claim a dog bite injury lawyer must usually show that the victim was not a trespasser or in the course of committing a crime and that he or she was in a public place or lawfully in a private place which includes the property of the dog owner. Compensation is not payable to a person who teases or provokes with certain exceptions for infants. Veterinarians, veterinary technicians, trainers and grooms may have difficulty in establishing liability as they are deemed to have accepted the risk. There are some exceptions to these rules for young children and advice should always be obtained from an experienced lawyer.

In order to obtain the relevant City or County dog bite law use the following procedures;

Attend a library or law library, and ask one of the librarians to point out the municipal code relating to the city or county dog laws.

Many communities now have a website and an internet search will often provide complete versions of relevant legislation. For More Information Visit: Accident Claim Solicitors