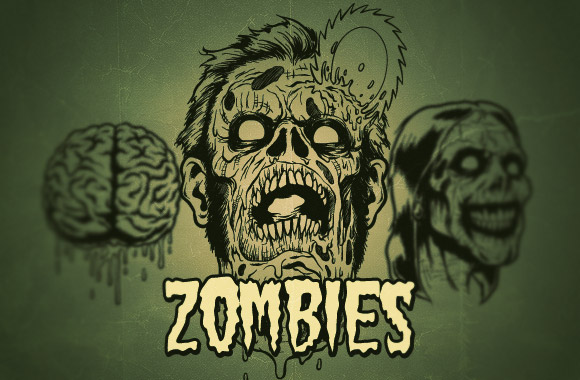 First it was wizards, then it was vampires, closely followed by werewolves. And what came next in the long line of pop culture obsessions? Zombies of course! Those flesh-eating, unstoppable, dead-eyed creatures that stalk the night and the darkest parts of our imaginations. The zombie Zeitgeist has hit, and today wherever you look, whether it’s computer games, comic books, the silver screen or TV, a zombie is likely to be closing in on you.

So where did this weird fascination with zombies come from? Well it all started a long time ago back in the creepy mists of time. The film White Zombie starring Bela Lugosi and Madge Bellamy in 1932 was the first time zombies had made the journey from Haiti to America. Up until then they had cropped up in historic tales and folklore associated with slavery and sorcery in Haiti. In1943 zombies did their bit for war time propaganda in Revenge of the Zombies which took a sci-fi approach to creating an army of the un-dead for Hitler’s evil doings.

But the film widely credited with bringing zombie schlock to the fore was the1960s low budget shocker, Night of The Living Dead. This black and white film written and directed by George A Romero, placed zombies in contemporary America, and once on US soil it appears the paranoia, terror and morbid fascination truly set in. Bitten by the zombie bug, the infection spread throughout popular culture and spawned a whole industry of zombie mania.

The recent wave of zombie popularity is often credited to Danny Boyle’s post apocalyptic movie 28 Days which premièred in 2002. This film helped push zombies back onto the mainstream stage and served as a reminder to the industry that as a genre, these movies were difficult to kill off. A couple of years later Dawn of the Dead, a zombie action romp and Shaun of the Dead, a genre-busting rom-com with zombies, both achieved box office and critical success. That opened the floodgates to a mass invasion of zombie flavoured cultural treats such as 28 Weeks Later, Zombieland and Cockneys versus Zombies. And when Hollywood A-lister Brad Pitt finally jumped on the runaway zombie train with World War Z, it’s credentials as a heavyweight film genre were sealed. The Brad Pitt and zombie combination in World War Z managed to net $540 million at the box office, one of 2013’s most successful blockbusters.

Any talk of the new zombie culture has to include reference to the massively popular US TV show The Walking Dead by AMC. Now in its fifth series, this contemporary, gritty take on the genre stars British actor Andrew Lincoln in the leading role and regularly chalks up multi-million viewing figures.

Zombie fans who can’t get enough un-dead action on the screen can act out their own nightmare scenarios at specially staged venues. Companies like www.zombiebootcampevents.co.uk welcome the ghoulish and brave to zombie invasions, fully cast with decomposing, rotten looking individuals who shuffle around looking for victims on which to feast. Popular for stag dos, hen nights and corporate events, the overnight experience lets participants pit their wits against an army of marauding, flesh-eating and frankly terrifying zombies. This experience is not for the faint hearted, there’s a clue in the name – Boot Camp – expect tough treatment of a military calibre and to be scared out of your wits. But if staying in military style accommodation, telling scary stories around the bonfire whilst eating and drinking tasty grub, and shooting at terrifying zombies is your idea of a good time, book early – these events are popular!

Why are zombies a popular theme right now? Many think it’s because of the uncertain times we live in. With banks failing, weather systems wreaking havoc and civilisation as we know it under pressure from various forces, the notion of the apocalyptic wasteland and a population fighting for survival against a lethal, deadly enemy holds great resonance. Others argue an opposite view that because first world life is relatively stable and cocooned from the harsh realities much of the globe has to endure (war, starvation,natural disasters, epidemics), we want to scare ourselves, to feel the thrill of fear in our veins.

Whatever the attraction, zombies certainly have their fans. And they don’t look like they’ll be disappearing in a hurry. That’s the thing about zombies – you can knock them down, but they just keep on coming, arms outstretched, dead eyes staring into your soul, salivating as they prepare to dine on your flesh….Feeling creeped out, yet? I know I am…